This guide explains what the spaced repetition system is and how it works on Skritter.

A Spaced Repetition System, commonly referred to as SRS, is a system for efficiently reviewing information. It uses a statistical algorithm to model the optimal times a piece of information should be seen in order for a learner to remember it. Skritter uses a unique SRS algorithm in order to help learners efficiently and effectively review vocabulary that they have learned. This way, they can spend less time forgetting, and more time learning and interacting with their target language.

As an adult learner, there are, broadly speaking, two main strategies for learning and remembering vocabulary long-term: spaced repetition, and anything else. Research shows that after enough characters, a learner tends to forget more than they learn with naive study methods. The guiding principle behind spaced repetition is that it's most efficient to review something at the point right before a learner would otherwise likely (statistically speaking) forget a piece of information. In psychological terms, this is called the forgetting curve, and SRS aims to surf that curve for maximum efficiency: older vocabulary isn't shown too often, and newer vocabulary is shown more frequently. After several correct repetitions of a vocabulary item, the repetitions will be months apart, leaving room for new vocabulary. 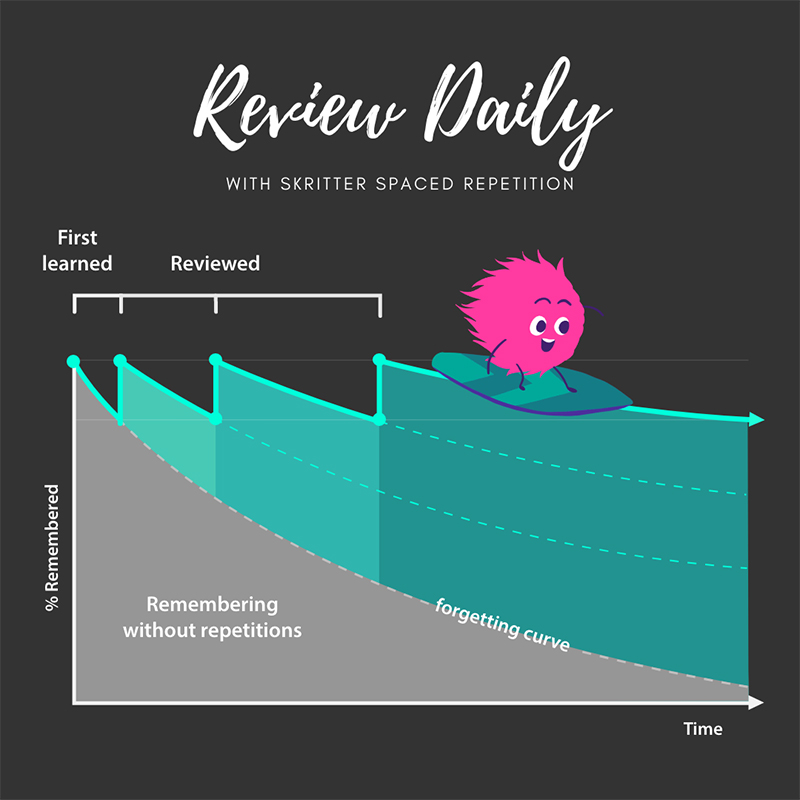 One part of Skritter's benefits over other systems is that it is designed with active recall for Chinese/Japanese character writing in mind. Active recall is the key to long-term memory: studies show memories last longer with active recall than with passive. In an active recall situation, a learner has to come up with the answer themselves, rather than just passively see the answer on the flip-side of a card and then make a decision whether they knew the content. This is why Skritter's writing, tone, and reading (website version) cards are all interactive and require a learner to do more than just mindlessly click through content as quickly as possible.

New items that don’t have many / any attempts and are answered correctly in consecutive reviews get an extra boost to their interval so they space out faster. If a new item’s first few initial attempts were all correct, it’s likely the learner already knew the item or it’s a super easy item. Either way, Skritter fast-tracks it so it gets out of the learner’s way. Because of heuristics like these and the context around each item, it’s a bit hard to prescribe exact values for item spacing. But if a learner reviewed a brand new item correctly at the exact second it was due each time, here’s generally what the interval spacing would look like for the first few attempts:

An item’s actual intervals will vary around +/-7.5% as Skritter inserts some minor randomness at the end of the calculations to prevent cards from appearing in the same order on different days. In the algorithm, there is an upper bound on the interval of 1 year. If a learner doesn’t want to review something at least once a year, it probably doesn’t belong in an SRS queue!

By default, standard grading is enabled which provides just two grading buttons when a prompt is complete (correct and incorrect). Users can enable the Advanced SRS grading option in the study settings to give themselves a bit more control over the grading intervals. When advanced grading is enabled, cards will present four grading buttons (incorrect, so-so, correct, and too easy) instead of two.

We recommend sticking with the standard grading mode though, as it involves less conscious effort required after completing each prompt, which makes it easier to avoid decision paralysis. In the long term, something that was marked as "so-so" probably ought to be marked wrong; the learner didn't know it as well as they wanted to. On the other hand, if there was some reason that they felt it was "so-so" versus "correct", that probably means they didn't fully know it and would benefit from having marked it as "incorrect" instead.

The test mode will (randomly) pull a specified number of items from a deck and quiz the learner on them, even if they aren't due for review in the Review mode. This is ideal for situations like cramming for a test, where the learner wouldn't want the repetitions to impact their overall scheduling, but still wants to focus in and repeat a section of content. It's also a great way to get a feel for how well a learner knows a deck-- say a learner completes a deck, and then later tests themself on the deck to make sure they still remember it well.

"Time Attack" mode also doesn't incorporate the SRS and doesn't affect scheduling. It's meant as a fun challenge and has a leader board showing the top people who've completed an attempt the quickest and with the fewest mistakes. Refer to this guide for more details on Time Attack.

Most of the mathematical precision everyone praises about SRS falls apart if someone misses days (or a day) of study. And even at its best, SRS is only an estimate of how a person’s memory will be and merely provides an efficient opportunity to re-encounter information they’ve seen before. In the long run, habit and consistency will reap more gains than tweaking the details of an SRS algorithm.

Our advice is to decide on a reasonable routine you can stick to. Don't obsess too much about scheduling, and don't spend more time on Skritter than you're going to be able to commit to in the future. Consistency is key, and if you go too fast too quickly, you might not be able to spend the same time or effort in the future!