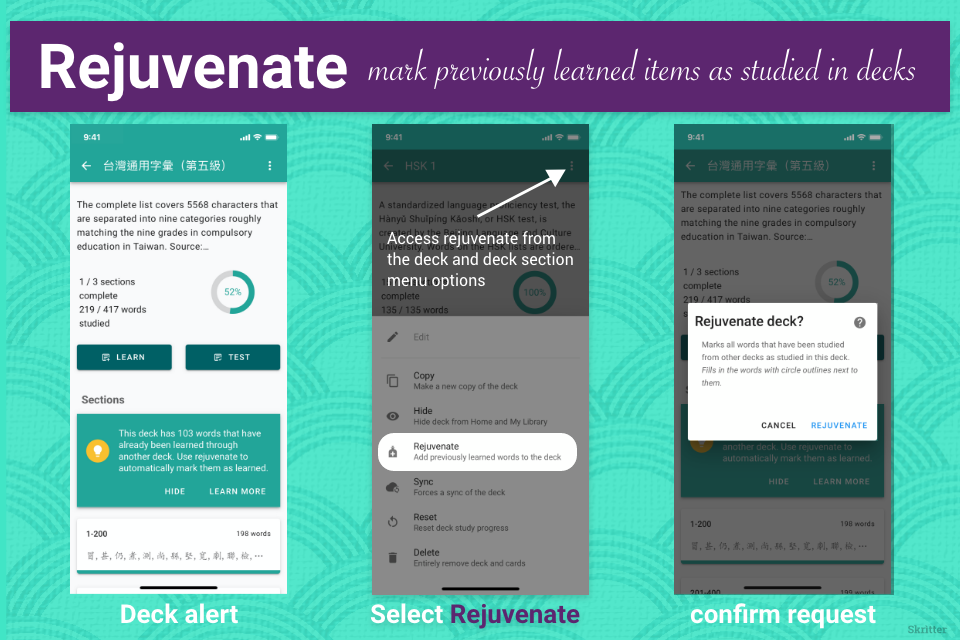 As items are studied and learned on the Skritter website and Skritter mobile apps they get associated with a deck or decks, which can be viewed from the STATS tab from the vocab info screen. If you’ve already learned an item from another deck, you'll now have the option to study them again with the Learn button (starting in Skritter mobile app version 3.5.2) or use the Rejuvenation feature, which is what this article is all about!

Why do I need to rejuvenate?

Rejuvenation is a way to mark items you've learned in other Skritter decks as learned without having to study them again. This ensures that you'll never lose any of your data, even if you delete another deck on the app. This was done automatically when studying on the Skritter website, but the process has never been this easy, or automatic until now!

When you open a study deck you'll now see an alert on the deck if we detect that you've learned from another deck in Skritter. You can either dismiss the alert and learn the items again. Or, go to the deck menu option and tap the Rejuvenate button. You'll be given a popup to confirm you want to proceed, and then the app will work its magic.

Note: The rejuvenation option can be used on both the deck and deck section level, depending on how you'd like to organize and study. Great for personal study decks, and textbooks you're using for class. The choice is yours!